When there was no food, Marta would leave empty boxes and cartons in the fridge and on the shelves so it would look like there was food. When she went down the hall the floor creaked beneath her. The radiator hissed. She stood by the window. There was no moon. She went to the sink, poured and drank three glasses of water, pulled her robe close, and returned to bed.

Wade was awake. She settled into his arms, and he began to kiss her neck and shoulders. Their lovemaking had become noiseless after the baby came. Now any amount of quiet time in the apartment was priceless. Wade was no day at the circus, Marta thought, but the magic wasn’t gone. They moved together with an absolute familiarity, the result of five years of nights together in the same bed. Marta was happy with this kind of slow magic. She loved Wade.About a month before, though, something had begun to happen whenever they made love. It evolved so slowly, so naturally, that it in no way seemed abnormal to Marta now. As they began, her mind would slowly slip away from Wade, and she would fantasize. It came upon her involuntarily, and she never felt guilty enough to tell Wade about it. These fantasies always started without detail, just a fuzzy outline of grays. But they soon came into sharp focus. A man. He was usually young and always well-dressed. His shirt was white and crisply ironed, with a smart bow tie knotted tightly beneath his starched collar. Her mind quickly filled in the rest, like a painting in progress--the black pants, the polished patent leather shoes--this part was often the same. The man’s face was never flushed. He was never breathing heavily. He always stood straight and tall, with a capable attentiveness, a pleasant smile animating his pleasant lips. He delivered his words in a clean baritone that made Marta shiver:“Good evening, Madam. Are you ready to order?” Now everything sped up. Excitement bubbled through her, sometimes spilling out in an odd giggle that surprised her and Wade both. It was the laugh of a girl without a care. She would pour over the menu while wonderful smells wafted out from the kitchen, and soon the food would be all around her: garden-fresh vegetables in a light vinaigrette, complex sauces, the smoky smell of a grill, of basil, delicate textures, pink and golden, garlic, hash browns with black pepper, caramelized onion, peas, thick wedges of watermelon, juicy pears, tangy pickles ... the waiter brought it all, anything Marta wanted. Tonight the service was divine. Sometime during the second course, the baby woke up crying. Marta held Wade close and folded her lips in over her teeth and bit them. The waiter had brought the dessert tray. She quickly sampled a little of everything: cupcakes, coconut ice cream, strawberries, carrot cake with white frosting, butterscotch...“Cheesecake!” breathed Marta. They lay together in the dark vacuum, holding onto the feeling. “What’s that you said?” whispered Wade, after a moment. Marta just opened her eyes and gazed at the ceiling. Then she rolled back the covers, went out, and got the baby. 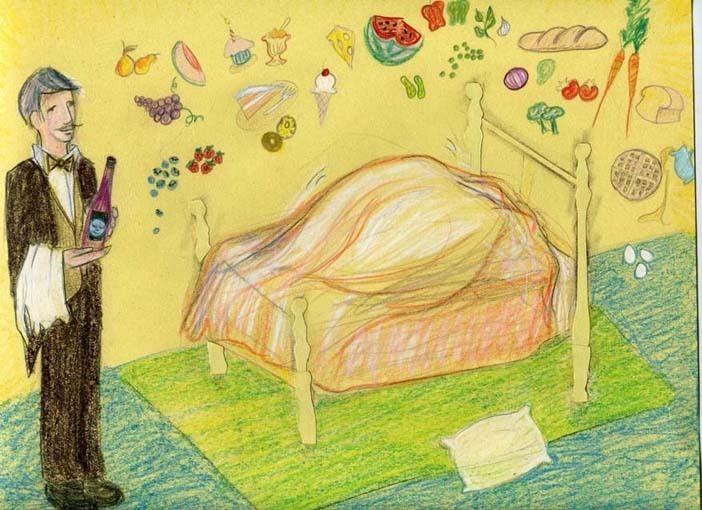 drop me a line