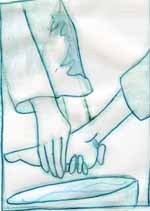 Mr. Olson was one of those old, old men who had somehow retained his physical power despite the years. Past eighty, he was still often seen in his driveway, loading or unloading his pickup, or working in the yard with a shovel or a rake. But no one mistook him for a young man: his skin was colorless, his cheeks fell slightly inward, and his head was mostly bald, although it was inevitably covered with a weathered gray fishing hat.

drop me a line