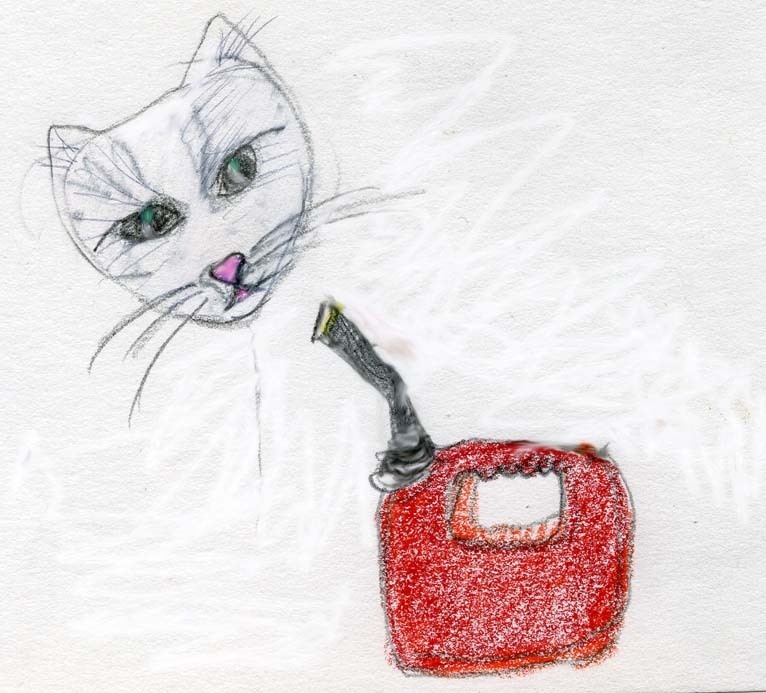 Abel felt bad, but he held the thing with both hands. His fingers could feel its little ribs. Eric tipped the can, spilling some gas. The cat squirmed wildly, and Eric couldn’t get it lit. Then Abel lost it. It darted left and away, slipping under the old Buick. Abel looked at the older boy’s red freckles. “Sorry,” he said.

“Jeez, it’s gone now. What are we supposed to do now?” Eric asked glumly. His face was pinched and severe, like he’d just sucked a lemon. Abel lowered his eyes to the stained cement floor of the garage. He thought the big oil spot looked like a giant lake, but from up in an airplane.

“Hey!” Abel said. “I’ve got my allowance and we could go up to Kapp’s and get some candy?”

“No way,” said Eric. The day was ruined. Eric left and Abel was alone. Abel wondered how fast the Buick used to be. It was a fixture in the garage, covered with out-of-season toys and junk and dust.

It was a windy day. The wind whistled in through a crack in the garage door. Abel found a spider web and went looking for something to put in there. One time he saw a great fight when he’d put a bee in a web. Far away, an ice cream truck played its tune. The cat came out from under the Buick and stood by the door at the back.

His mom called, dragging out his name. Her voice carried over the whole neighborhood. “Yeah?” he said. She lowered her voice. “Come in and eat, honey.”

“I’m not so hungry,” Abel said. He moved slowly toward the cat. The cat’s eyes widened. Her fur was matted and she stank of gasoline.

“Come on in, Abel. I made you a Wimpy--” Abel took up the cat, opened the door, and went around to the side of the house where the hose lay in a tangle. Eric is a jerk, he thought. I should kill him.