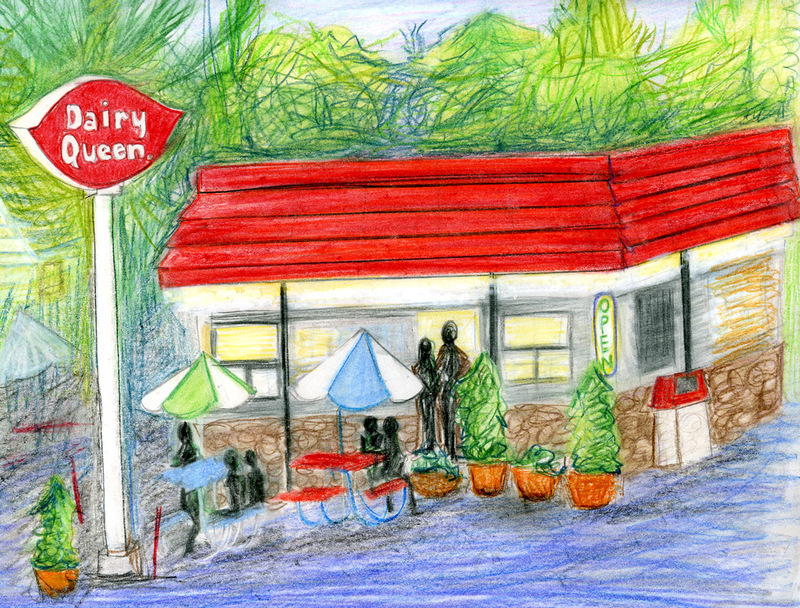 They called her that because she was always about as filthy as a person could get. From head to toe, it looked like she'd never had a bath or seen a bar of soap in her life. Except for the whites of her eyes and her teeth, which were as white as salt, her body was always covered in ash-gray dirt. She was weird, but it got to be kind of special to spot her as I drove around town with my mom. She was something different, alright. On top of being incredibly dirty all the time, she wore some pretty wacky outfits. On a hot summer's day, for instance, she might've worn a one-piece bathing suit with a frilly pink tutu over it. She always turned heads. And when she spoke her face and her voice were very animated. It looked like the faces of my mother's new friends, actually, when they speak to me or my dog. She was always smiling in this exaggerated way, and as she crossed the street she might say to a guy in his car, "What a bright, shiny car! It must go very fast! You must be very happy!" In a way, no one would say that, it was very weird, but in a way, it made sense – she was being like a clown, or like how a teacher is sometimes, playing a part.

I had a few good teachers in school, actually. I got along with them better than most of the kids. I was smart, but not the kind of smart that makes you lots of friends, more like the kind of smart that gets you tripped in the hall. People seemed really bothered when I got an answer right, and it also seemed to bother them that my clothes weren't always brand new. It was when we were shopping for school clothes at the mall that I had my first run-in with Rebecca.

It was winter, and she wore this huge fur coat in winter, but at the mall we'd see her without it on, and I always wondered where she could've stashed it. Then one day I saw a security guard, a round little woman, leading her out of the mall, and Rebecca said in her crazy smiling way, "What? Wait. Where is my coat? Let me get it first, please." Once the lady let go of her arm, she darted up an escalator. I followed at a distance, but lost her, and went into the bathroom. There she was. It was weird seeing someone like that, with the reflections in the mirrors and everything. I passed her and she smiled that strained smile at me. Once in the stall, I paused, hearing the shuffling of paper, and then I came back out to see what she was doing, and found her dragging her big coat out of the trashcan. She looked up at me, afraid, and so I said, "Don't worry. It's Okay. I won't tell," and she looked at me like a cat you don't know does sometimes, like saying, "Can I really trust you?" and then she got out of there. After that I started seeing her around more often.

And then of course came the day at the Y when she walked into the locker room with that huge bag of beauty products from Sav-On: shampoo, conditioner, soap, big sponges, fingernail clippers, fingernail file, cotton swabs, shaving cream, razors – it was hilarious. She got under the water and shouted. And then after a while she started singing:

She asked me to scrub her back and I did it. I wasn't scared or anything. She didn't look at me with that clown face – like my mom's friend Dale, who wears her smile like it's a mask that's hiding a face full of worms – she gave me a smile that made me feel appreciated.

Once I had asked my mom where the Dirty Woman went when we didn't see her, and my mom got a faraway look on her face and said, "Oh, she goes back to her mansion in the woods and gets cleaned up and then spends a few days walking around in a clean white linen dress, sipping a glass of imported water from France, I suppose." But that day in the locker room I found out that she hadn't taken a shower in two whole years.

My mom has always been pretty relaxed, but I knew she wouldn't understand about the Service, so I've never told her. We always got along fine, but she's always smoked a lot of pot – I don't know, I never thought we really bonded like we could have, but we were always friends. We were close, but then not really, too. We'd snuggle up and watch movies together, but I never poured my heart out to her or anything. I guess she got lonely, because she started making friends with the women from work. They'd go out after work, or on the weekends they'd help each other with their landscaping projects. I was happy that she'd found some friendship, I just wished she hadn't had to stretch so far to get it.

After Rebecca got all cleaned up, I gave her my gym clothes to wear home. I know, that sounds gross, but they were a lot nicer than what she had with her. Her hair was a mess, too. We did the best we could with it, but it was a real mess. She ended up going to Cost Cutters in the mall the next day and getting it all cut off, and now she wears it really short and all slicked back – she really looks like a totally different person now. Lots of people don't even know she used to be the Dirty Woman.

Later that week Rebecca started the Sisters of Service, then I joined up. That June I turned sixteen, and I got a job at the Dairy Queen on Broadway. After about three months I was the manager, so when there was an opening I hired Rebecca. There are a couple other part-timers, but we actually work most of the shifts there. After eight hours the day is pretty shot anyway, so you might as well just stay working.

It's pretty good there. We get to eat a lot, and we can keep an eye out for anyone who looks like they might need the Service. The Service isn't a religion or anything, it's a service. Some people need the Service, some don't. We don't push it on anyone.