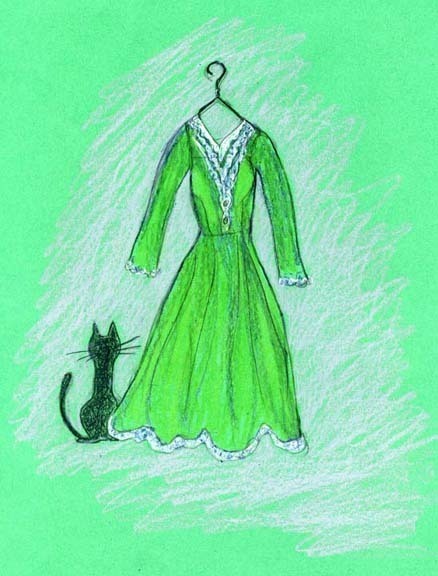 Even in the photograph that they used on the cover, you can see her tensing up, defensive, bracing for the criticism she knew was coming. She shouldn't have worn white. You have to be dark to look good in white, she thought, like that waitress at Peoney's--or like Anne. They said it would bring out the color in her face; well, they were wrong. And the watch--they said the watch would give her an air of authority. That’s me, that’s me, she thought, always watching the clock, always uptight.

In the photograph, one arm, the arm with the watch, is folded protectively over her stomach. Her other arm is bent up, her elbow resting on the watch-arm's closed fist, her hand clutching a couple of wooden spoons--it’s awful, really--she shouldn't have let them pose her like that!

She had felt like a doll, in the worst sense, having them manipulate her limbs like that, and then to have it come out like this, so stiff, so posed. During the shoot she had tried to collect all her discomfort and change it into confidence and beam it out of her eyes and into the camera and on into the world, into all the kitchens of Today's Vegetarians. But they'd done so many poses, she had gotten tired, and now anyone who looked could see it plainly on the book's cover.

Ever since she had decided to write, she had kept a blue notebook with her at all times and prodigiously filled one after another. When she ran out of cookbook material, she’d just write anything at all, believing that if she ever stopped completely she might never start again. Because of this, her notebooks had become littered with diary entries, and so it was often painful, coming across these raw confessions, when it came time to condense her notebooks into manuscript form.

"Where is that girl?” she said out loud, checking her watch. Then she got her notebook, went to the couch, and began scribbling:

Who I am: Carol. I live alone. I wrote a book, the acclaimed author of Today's Vegetarian. Defensive, American. Lots of trouble keeping pets alive. Sick cat, vet said raw hamburger is best. Vegetarianism. The shifting of beliefs. Middle age. Fed cat veg diet--no connection to kitty AIDS. Wondering. No children. Only pets. All died. Of course, of course, but why is it so sad? Cat eats meat now. Now it’s the cat's life vs. the cow's life. Cat is not an herbivore, though, is a descendant of the great cats, the saber-toothed tigers. It’s not my fault he’s sick. He needs positives. Psychology and food, comfort food, the placebo effect. When I was a girl a handful of Cool Whip seemed to break my fever. I got it out of the fridge, it “called” me, my body “craved” it. The body knows what it needs. Colon cleanse. raw foods, blood type diet. In the book, I used milk and cheese, but not eggs. A moral line was drawn, but I always disliked eggs, so can that be claimed as a moral good? Of course not, no. But it worked, in the book, so it was a positive. Cat's body craving its comfort foods, wants milk? Wants meat? Cat's body knows what it needs?

What is really known about veg? Hindus have been veg forever, but what studies have been done? Can you compare two separate lives? Can you compare a veg with a meat-eater? Too many factors, but what if veg lowers a vital but hard to measure attribute, like the ability to appreciate beauty or to feel love? What if I am missing out? What is important in life? To have a varied experience? Or to live spiritually? Does veg bring you closer to your senses, or maybe detach you from your senses? It’s all up to you what you make of these things. So everything is subjective? No, starving to death is not all in your head. What about the bond between an owner and a pet. Could I have made Jones sick, by being guilty or neurotic or something? Is a cat subjective? Will it react to a placebo? There is a lot we don't understand, there is a lot we know, though. Theories change when new discoveries are made. If a cat reacts to a placebo, does that mean it has a soul? Is it subjective enough to create its own reality? What about kids? Are kids responsible for their own realities? Can we compare people to kids? Some people are immature late into life. Kids to pets? Why not? Could there be many classes of differently evolved people on the earth, only distinguishable on a psychic level? Could there be several levels of cats? Could this psychic evolutionary caste system extend beyond all species, all things? Could there be a person, cat, and rock that are more closely related than that same person, her sister, and their mother? Some say yes, others no. Does it matter what people say about something? Can we really study ourselves objectively? My cat is sick. It will die. They all do, of course. What to do? Cry. Maybe get another. Maybe not get another.

She threw down her pen and glanced across the page. Her writing had a lovely right-leaning slant, she thought. She had always thought so.

Her mind turned back to the book. She hadn’t been ready to let go of the manuscript, had she? Yet she also felt she had done all she could, given the deadline. And now the thing was done, she couldn’t touch it again, people would read it as it was.

The doorbell finally rang. She walked through the kitchen on the way and put on the tea kettle. Soon it will be over, she thought, and she let out a deep breath, and then let Anne in. Anne’s arms were full, and she was out of breath. Carol took the big white dress box from her and left her holding the ground beef. She opened the box and took out a green crushed velvet dress.

This will get me through the evening, she thought. In the elegant dress, along with her rhinestone brooch, it wouldn’t matter if she was pale or tense or old, or heartbroken over her cat or about to throw up. It was a shallow ploy, but it always worked, and she knew it would get her through the book signing. As she put the dress aside, it occurred to her that Anne surely never had to connive like this.

“How is Jones?” asked Anne. “The same,” Carol answered flatly. She was finished being polite to Anne; it was clear that it was a wasted effort. What did she know about life, or about loss? No, she reconsidered, that was all wrong.

“He’s just the same, Dear, just the same,” she said, as a way of starting over, and turned toward the young woman. “He’s at the vet now. He stayed there last night. I wasn’t doing him any good here.”

“Oh, I suppose not,” Anne agreed, but it rubbed Carol the wrong way. Why am I pandering to this idiot? she thought. All she does is torture me with her dark hair and her healthy skin. She turned away, squeezing the dress box, but caught herself. “Would you like some tea, Anne?”

After Carol changed into the dress, they settled in to drink their tea on the couch. Anne smoothed her skirt. “That green goes great with your eyes. You’re really going to wow them tonight.”

“Oh, let’s not talk about that,” Carol said quickly. They were quiet. Carol leaned nearer, and looked at Anne’s cheekbones. “Anne, can I get your opinion on something?” she asked, confidentially. “I want to know, well, do you think I could have had anything to do with Jones getting sick?”

"What I mean is, there’s such a bond between an owner and a pet--you know, maybe I--am too neurotic and he picked up on that or something.”

“Yes,” Anne said steadily, touching Carol’s knee with an easy gesture of warmth, “but they all do--they can’t live forever. You know that.”

“I suppose so, Dear,” said Carol, looking away. She caught the dangling brooch. “I fed him only vegetarian food, Anne, his whole life.”

“No, no, no,” Carol said irritably. “Not good. Cats are not herbivores, Anne, cats are carnivores--didn’t you know that? Descendants of the great cats, the saber-tooth tigers.” Anne’s face began to freeze. “They aren’t meant to eat vegetables, Dear, they want milk. They want meat. That’s why you went all the way to Nature’s to get that hamburger this morning, remember?” Her voice had risen, and Anne began to shrink into the couch. Carol took a breath and lowered her voice, but didn’t let up. “You don’t think much of me, do you, Anne? You don’t think I’m very grounded, do you? A little flaky, huh? All this time,” she parodied Anne’s voice: “‘I work for that author, Carol Combs--she’s a little flaky, but she pays me well.’ Is that it? You think I’m the type of person that would let my cat get sick in the name of some half-baked ideal, don’t you?” Now she half-hollered through her anger, blinking and shaking her head when a word wouldn’t come. “Like I don’t know what’s...natural and what’s...obviously unnatural? Do you think I’m one of those self-righteous...flakes who can’t face up to the way things really are...who would rather let their baby die than get it vaccinated?”

"No,” said Anne, looking down and smoothing her skirt.

Neither of them spoke as Anne drove Carol to the bookstore. Anne dropped Carol off in front, where she found a large crowd waiting for her. She greeted them warmly, said a few words about B vitamins, and then took a few questions. As she signed her books, she was funny, and gracious, and did her best to reach out to those who were nervous, letting them know with a friendly smile or a self-deprecating joke that there was nothing to be nervous about. She had blooms in her cheeks, which made the green of her dress come alive, and occasionally her brooch sparkled, despite the bookstore’s florescent light. Anne, still pale, busily arranged things and greeted Carol’s fans, although she must have guessed that she was fired.